After Campbelltown farm animals begin to appear in the fields, faces down in the grass.

A woman hasn’t paid the difference. The conductor tells her not to worry about it – because it’s Christmas, he says. “Oh, thang-kyou,” she says.

A can of soft drink is cracked. There is a pause, and then it is opened, as if he didn’t want to disturb.

Everyone is dead or dying or died years ago.

New home new home old home boarded and bombed with graffiti. Long houses which in my mind when I see them I attach to the word homestead.

In a field of gumtrees there is a tree house, dark and stuck between two trees like it is an organic extension of them, with a blue port-a-loo outside. (I, at first, instead of writing tree house, wrote true house.) 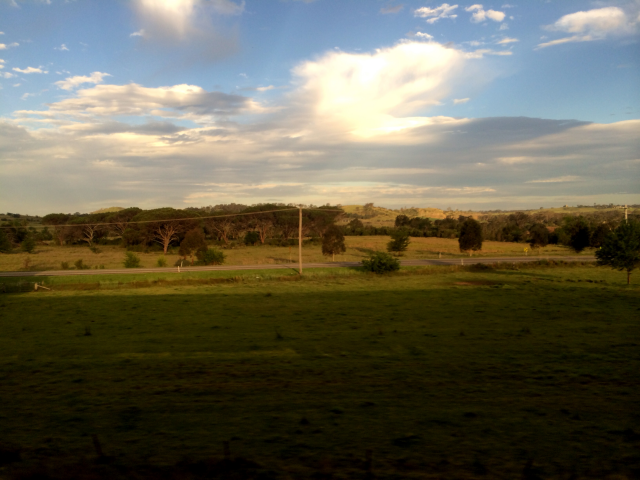 Dirty cloud and dirty earth and cows cluster on a hilltop like they wait for something other than dusk. (I’ll try to get a shot of a kangaroo for you.)

(The train whistles; the faster we go the more desperate the whistling. I don’t feel like writing, or reading, so I do this.)

Right on time: two grey shadows in the fields like the upturned trunks of trees: kangaroos.

The names of the stops mean nothing for me. I do not know them and so they are only names. For a long time, while we were still in Sydney, the rail line channels through industrial estates, factories and warehouses, or the leftovers of industry. I don’t even know this part of town – I look for signs or buildings or the shape of places to know where we are. These places are empty. I don’t know my city.

I think about the conductor. I imagine him folding his work shirt in a dim motel room, alone, turning on the radio that is built into the bedside table. Or is he going home? Does he have someone to fold his shirt? 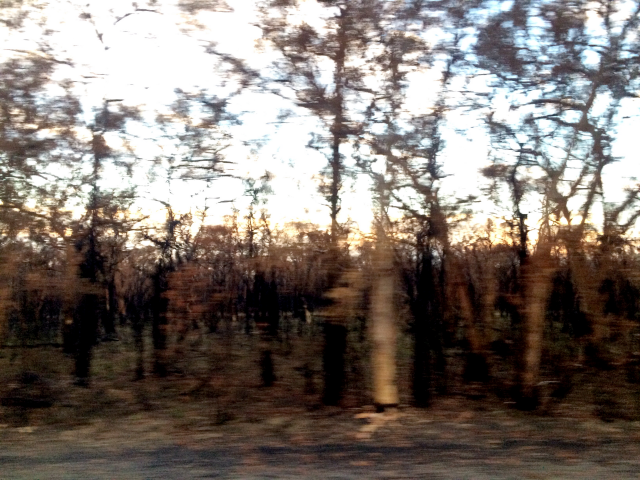 We pass a muddy clay lake and burnt out trees that a fire has whipped bare.

A caravan park where the caravans have been turned into permanent homes, television aerials on rooftops, the caravans stripped of their ability to transport; black forest and then blackened fences and then spaces where homes used to be.

A footy lost over the fence.

One corrugated shed then the remnants of a shed, as if it’s been blown up or blown away.

The buffet has closed but there is hot food left which they don’t want to waste and so everything is half price: plain meat pies are 1.90; pasties are 1.70; sausage rolls are 1.80. To prevent wastage.