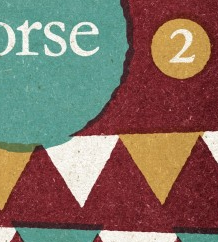 I have a short story titled “Black chalk with touches of white on brown paper” in issue two of Gorse.

Gorse, edited by Susan Tomaselli, is a literary magazine out of Ireland that carries on the tradition of the avant-garde, Modernist “little magazine” of the early twentieth century (Niall McCormack pays homage with his beautiful covers for Gorse 1 and 2) – my kind of literary magazine, and I’m thrilled to be a part of it.

Super proud, also, to appear in the same pages as some writers I’m a big fan of, including Rob Doyle (his debut novel Here Are The Young Men is electric), Jonathan Gibbs (his novel Randall is a sharp take on the YBAs), Matt Jakubowski (who I shared the Murnane pages with in Music & Literature 3), and many more.

Big, big thanks to Susan.